I pulled a Dream Robin last night. I guess after a month+ of bad luck on summons the floodgates have opened. I dunno if I'll ever really use him, though.
Top

Heh, I keep mixing up my Robins and Corrins. And I'll probably keep doing that 'til I actually play Awakening and Fates.

Kinda wish FEH had switched up the hair colours on some of the avatar characters.

Yeah, their default forms are so generic that I can understand that. They at least should have made their hair colors different, instead of all white.

^ I typed that second sentence before I read the rest of your post, so yeah, we're in agreement.
Top

Nintendo appears poised to drop a bunch of Three Houses details in a Direct... tomorrow!

So that could include a more specific date than just Spring 2019 plus probably a lot of plot/character stuff and a refresh on the gameplay info we got at last year's E3.

That feel when you have single digit orbs going for LA!Lyn, knowing that the voting banner is coming as well...

But yeah, I'd say the new "regular heroes" banner coming next will be Three Houses.
Top

Finally! Also, I like the cool glow +10s get around their portraits in the team view. Didn't know about that.
Top

Mm, that's good Reinhardt. PRECISION GERMAN ENGINEERING. (that's a different Reinhardt, but I like to pretend they have the same voice and catchphrases.)

'til then I'll just say I like the art and the look of the new/expanded systems a lot and there's way more anime cutscenes than I expected and everything's in English and the state of the world still reminds me of Dune and I still love that about it. July 26th! I might actually have a shot of playing this one at launch!
Top

Oh yay, a customizable main character that isn't just, "oh, you lost your memory and have no family?" I like that better already.

Only one house per game = replay value. Nice.

The whole school thing in general is a nice change. It's cool that you can earn new abilities and skills training that way, instead of just in battle.

I'm still an absolutely newbie when it comes to proper mainline Fire Emblem so lemme know if some/all of these observations are just like, stuff that Fire Emblem has always done, and not necessarily new/modified systems being introduced by Three Houses 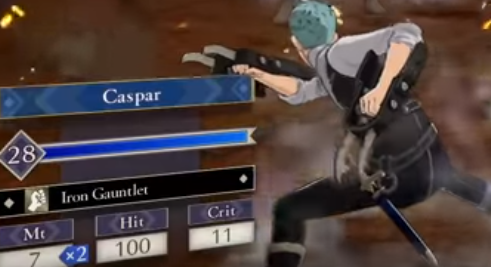 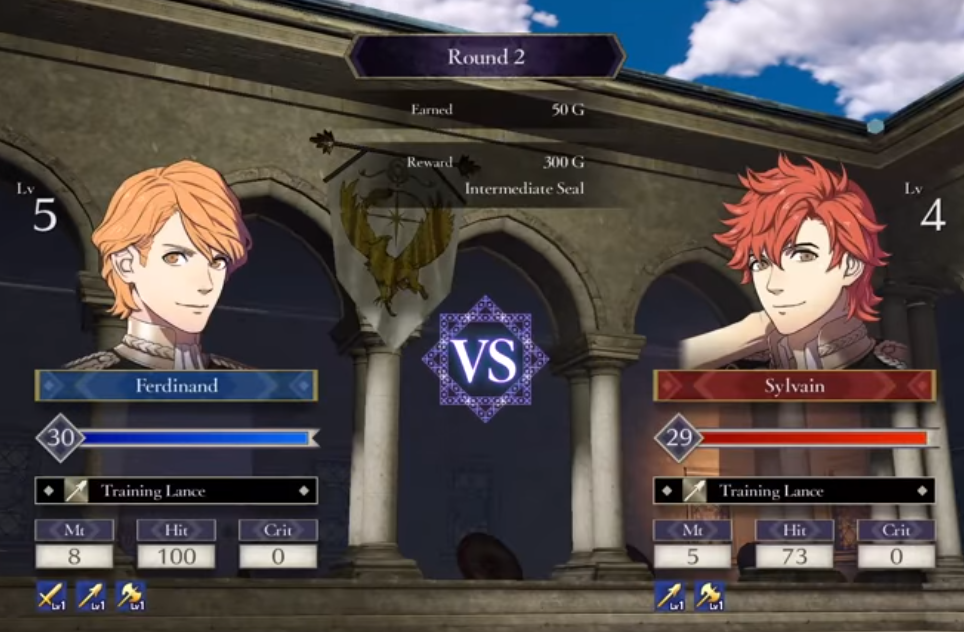 homebase sparring stuff, makes me wonder if it works kinda like the sparring you could do on the Dauntless in Suikoden 4, just... selecting two characters and having 'em go at it 1-on-1 instead of in groups. 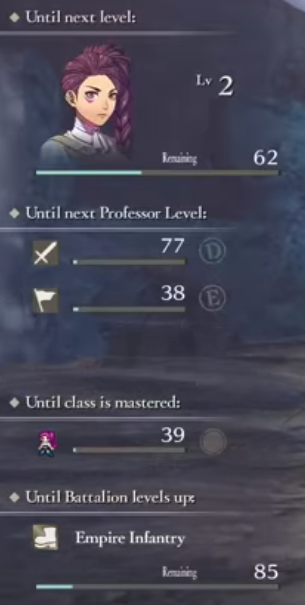 This looks like a loooot of stuff to level up

but naturally I dunno if it's more than the FE average for character progression. this character is Petra, I think, and I like her design a lot

different outfits for different classes, hell yes. I think we saw at least three different outfits on Edelgard in this video. (FEH's never gonna run out of Three Houses alts, holy shit.) I guess any character can learn any weapon/movement combination? I wonder if some characters will have affinities towards/against certain classes/weapons/mounts, a little like what Suikoden did sometimes with skill training. 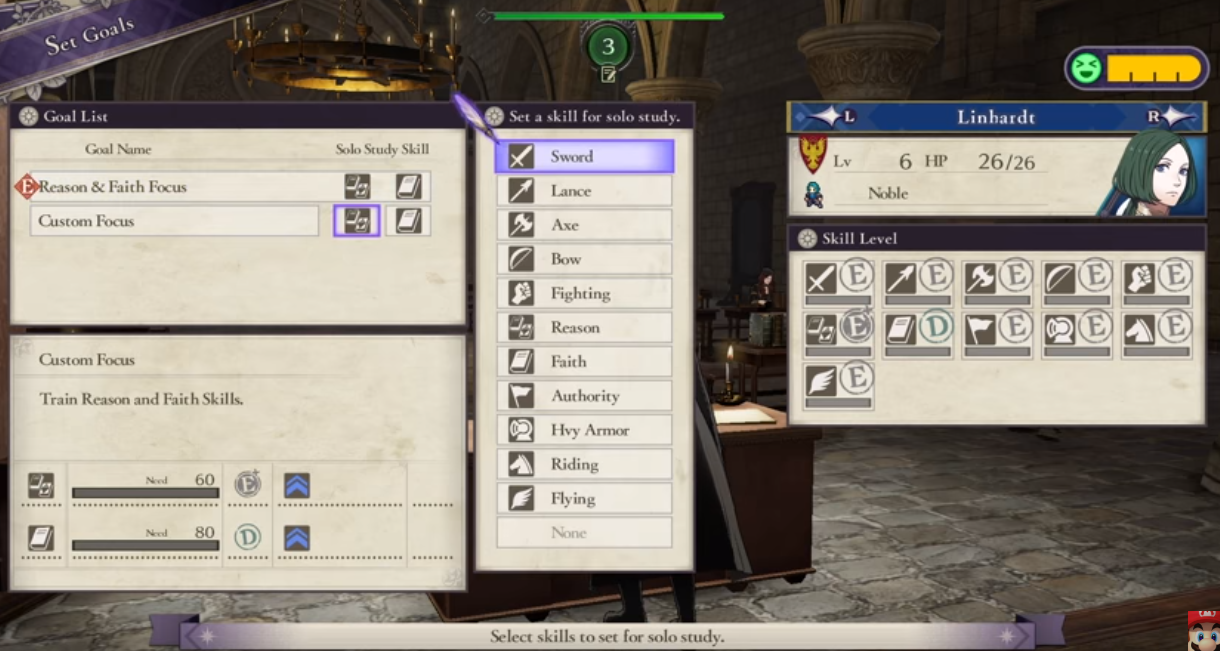 ...maybe that's what we're seeing in these shots, actually.

Anyway, I can't wait to jump in and figure out what all this means.

...just probably not via this edition in particular.

Seems right. I was thinking about claws, but beasts are considered their own type, so humans using a claw-type weapon would be different. I wonder if the weapon-triangle still applies here and if these weapons would just be considered colorless or something else?


Delthazar wrote:This looks like a loooot of stuff to level up

but naturally I dunno if it's more than the FE average for character progression. this character is Petra, I think, and I like her design a lot

Yes, it does... but if it lets players grind like the 3DS era of FE games, I'm not worried. Also, someone else pointed out that Petra looks a bit like young Mitsuru, and Caspar looks like Akihiko. I agree.


Delthazar wrote:different outfits for different classes, hell yes. I think we saw at least three different outfits on Edelgard in this video. (FEH's never gonna run out of Three Houses alts, holy shit.) I guess any character can learn any weapon/movement combination? I wonder if some characters will have affinities towards/against certain classes/weapons/mounts, a little like what Suikoden did sometimes with skill training.

This is stuff that's typical for all FE games. Outfits normally vary between classes, though I bet it'll be less subtle now on a new system. Any character being able to learn everything is weird, though, so I'll believe it when I see it. You're right about there being affinities in the older games, though, so I think that'll persist. Most characters in older games can only go down 1-3 paths of classes. I'd be shocked if everyone could learn everything now, even if the non-affinities just took longer. Using that screenshot as a guide... well, Edelgard is basically a lord, so probably an exception?

And yeah, $100 is a bit steep for that special edition. I don't need a calendar that's only good for one year, nor the soundtrack that I can probably easily find online. I've been springing for a lot of special editions lately, but I'll just take the normal one of this, especially since the expense of the Switch itself will be new.
Top

Seems that Koei has been involved on development of Three Houses which probably makes sense if they're using a modified graphics engine from Warriors.

Anyway, I, uh, found a source for a bunch of Fire Emblems ranging from the GBA to the Wii, so, I guess I can pregame properly, huh.

Any of y'all have experience with these older FEs? Fire Emblem, Sacred Stones, Path of Radiance, Radiant Dawn, Shadow Dragon? Holla if there's anything I really need to know about any of 'em.
Top

The older they are, the meaner they are, more or less. Permadeath until Fire Emblem Awakening.
Top

Sacred Stones is the easiest of the older bunch because it has a tower where you can grind. But yeah, Layfield is right.
Top

Welp I've already lost Kent like three maps into Blazing Blade (easier to just call it that from now on) and keep tripping over Game Overs on the fourth so yup, y'all ain't kiddin'.

I reset when someone dies. It's very frustrating, to say the least, especially if an enemy gets a surprise crit or something near the end.
Top

I've probably been subconsciously attempting to tackle Blazing Blade like it's XCOM or something, which is totally the wrong approach. Instant permadeath without even a couple turns of bleed-out isn't something I've dealt with in while. So I need to be thinking more like Banner Saga, probably. I think those games had the same immediacy. Maybe Falcon remembers better.

Five Fire Emblems in five months is a fun challenge which I should stream myself doing if I can ever find the energy. Five-By-Five.
Top

I should also be playing some of them myself now... I have a translation patch of 6, but it's also hard and I keep losing someone on a lower level map. I need to finish the final map of Sacred Stones, and also do Ephraim's route. I need to re-play Path of Radiance, since I got to the end like 6 years ago and moved, and lost access to my old file right before I actually beat it, and I need to do all of Radiant Dawn, which I now have as of today (thanks for that resource, Del!) Oh yeah, and Shadow Dragon. I bought that when it was new and was turned off because you're forced to kill someone off in the beginning and I hate losing people. I'm over it now that I know one of the options is a pre-promote that I wouldn't use anyway.
Top

They're pretty nice! I have none of those 4 units, so regardless of which random unit I get (because these will be golden orbs and we can't pick the color) I will at least be happy to get someone new. I want 75% of those units... don't care for that version of Lyn. I heard she sucks. So, 75% chance of a unit I actually want, which are good odds, and 100% chance of a new unit. Mostly hoping for Myrrh or Azura.
Top

Heh. That Lyn would get me to the four Lyns I need to roll a new Aether gimmick squad.

Yeah, I don't know why she has so many alts, but that version of her is by far the best, so I've heard. I didn't really shoot for her the first time she came around because I have Bride Ninian, though, but this Azura's got a nice dance perk that no other singer/dancer has.
Top

Delthazar wrote: ↑
Thu Feb 14, 2019 7:04 pm
So I need to be thinking more like Banner Saga, probably. I think those games had the same immediacy. Maybe Falcon remembers better.

Not quite, despite how dangerous the game was to your caravan your characters couldn't die in combat, they'd just take wounds. You only lost characters via out of combat choices.
Top

I just got Greil! Should have gone with my gut and stopped, since the next 4 picks were garbage, but I'm still happy.
Top
Post Reply
2320 posts