So the DLC schedule made no sense before because I thought the last wave came early, and didn't expect the new wave until December. But now I see the last wave, "coming *by* April 30th." So I guess they just had deadlines and not actual release dates all along.

So it's up. I saw screenshots of Hubert's evening wear and he looks damn fine (it's more like fancy ball attire, not sleepware) and the sauna outfits are ugly as sin. I need to see Hubie in the Butler outfit stat.

Also, save slots increased from 5 to 25!!! Wish we had that sooner, because now I have to start shit all over to have some saves where I want them. Oh well. Jeriza and Anna are now available, too.

Nice of Nintendo to post only the smallest possible screenshots

but yeah from what I can make out by squinting those sauna outfits are pretty bad.

Still feels way too soon for my next run, I have way too many other things to play. Anna though. Anna. Hmm. No, must resist, must clear out this damned backlog. 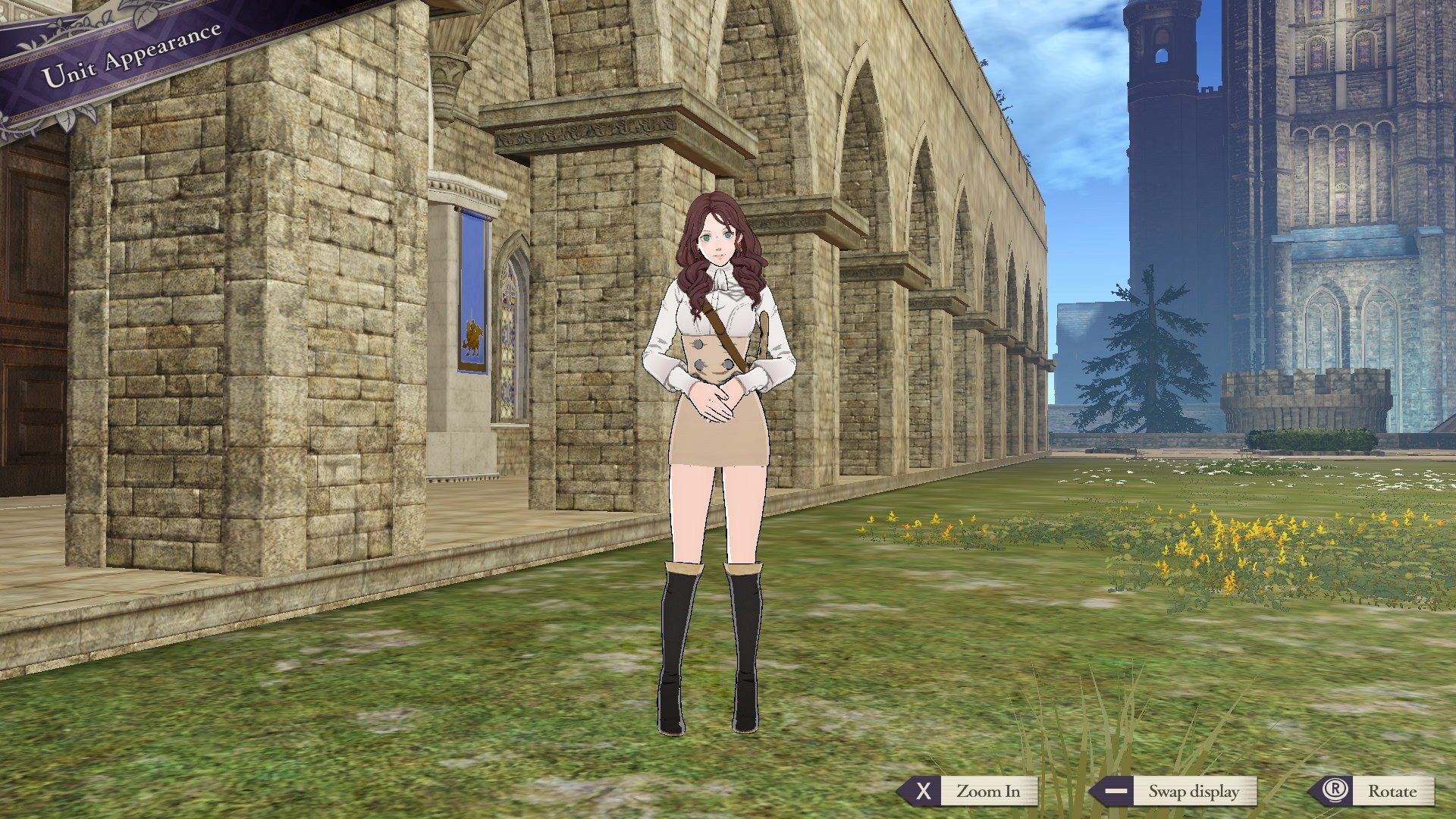 Is that new outfit for Doro just a recolour of Petra's uniform? 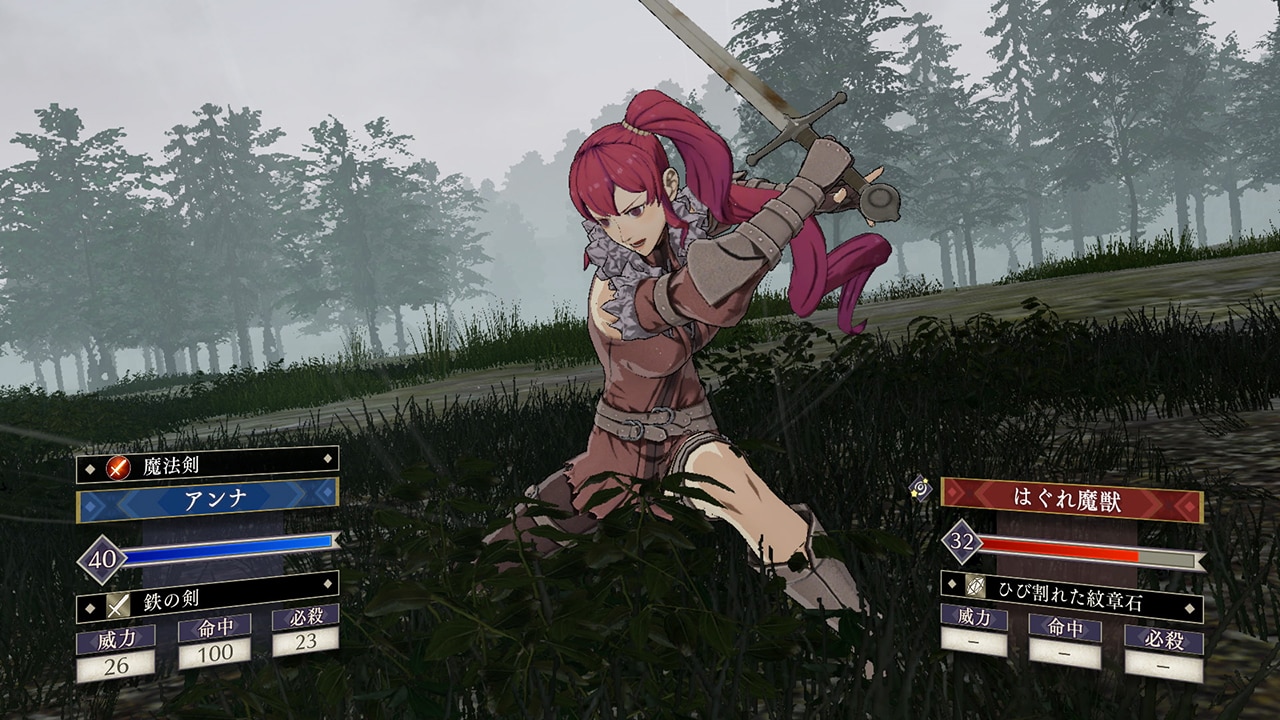 sounds like she's available after Chapter 3, meaning she shows up way earlier now than before. she'll also have a paralogue.
Top

Yeah the summer outfits are just beige recolors of Petra's outfit for the girls, and Caspar's for the boys. Not a bad outfit design in either case, but I hate the beige color. Doesn't fit most people.

At least the butler/maid outfits have classic colors (black) and then custom, for each character, which actually fits. Linhardt's is dark green and Bernie's is lavender, etc.
Top

Most of it looks recycled from the Book III preview trailer.

But the summoner's weapon has definitely been a gun the whole time.
Top

I didn't get far enough into this game to know who any of these people are.

Perceval comes with a full kit, so that's nice.

Echidna is probably the demote.

Oh hey, Chad. I actually know who he is. No idea who the TT unit is, though.

Everyone (myself included) was expecting the Farfectched Heroes banner so this is an odd one. I want to go for the red bow lady but we're also not getting a Forging Bonds so no tickets... hmm. My orb stash is kind of low.
Top

Initially thought a dragon-effective dagger was new, but HotSprings!Hinoka's water buckets already do that. Perceval and Igrene seem the choices here.
Top

I'm surprised there's still no Kent or Sain in FEH, you meet those duders in like the first or second map of Chapter 1 of Blazing Blade, right after the tutorial with Lyn. Before Florina, even. (They're not very interesting, I doubt anyone really cares.) But banners for Binding come up more often than Blazing it feels like, despite the latter being out in more languages.

I was supposed to skip this banner, but since I've been wanting a red bow unit in the game forever. I spent a little over 100 orbs and all I got was a duplicate fucking Laegjarn.

My luck has been awful lately.
Top

I want to say you're saving your luck for Christmas banners, but history would suggest that's not how it works for you.

Maybe this Christmas for your luck to finally show up.
Top

Bier_Engel wrote: ↑
Tue Nov 19, 2019 5:34 am
I was supposed to skip this banner, but since I've been wanting a red bow unit in the game forever. I spent a little over 100 orbs and all I got was a duplicate fucking Laegjarn.

Pretty much the same deal here, dropped 100, got the new Catria from one of the last couple banners. Ehh.

It occurs to me just now that I rarely use flyers of any kind.
Top

Falcon Critical wrote: ↑
Tue Nov 19, 2019 11:34 am
I want to say you're saving your luck for Christmas banners, but history would suggest that's not how it works for you.

Maybe this Christmas for your luck to finally show up.

Now that I have 3 to spread myself on and less than 100 orbs currently, I'm not optimistic. Is Christmas Tharja still worth pulling 2 years later? I feel like I still see her in arenas occasionally.

I guess it depends on what game this year's banner will feature people from. If I don't care for the characters, I can try for Tharja and armored healer Eirika again. Since we just got Tellius characters in the Halloween banner, I probably don't have to worry about that (and I need orbs for V!Soren again in February, which will come up sooner than I realize). But if we get more 3H characters finally, my orbs will be fucked.
Top

Christmas Tharja is a enemy phase defensive powerhouse and totally worth pulling for. I'd probably be using her in Arena more often if I didn't have a +10 of her normal form built in a vaguely similar way.
Top

Yeah Christmas Tharja is still great, both for her stat line and her voice line delivery. I've been sending her with Christmas!Robin on lost lore expeditions.
Top

Cool. Guess I'll try for the 3rd year in a row and hope I don't get pity broken 3 times again. Red seems to do that to me especially.
Top

Haha, I don't have either trained up so I thew in a level 1 Raigh for the first run to unlock whatsherface.
Top

I got a copy back when he was new (like, launch?) I think he was my first ever 5* red mage, so I used him a lot back then. He's honestly not as bad as people say, since he's got that cavalry effectiveness. That said, I'm not wasting dew on his fancy new refine, since I doubt I'll use him again after this. I had a spare Lugh book lying around that I didn't know what to do with so I merged the bane out of him. Honestly this hasn't been bad.
Top

continuing to take random jabs at this Binding Blade banner got me... a Siegbert pity-breaker. With a good IV, but still, I'm pulling for Igrene, get outta here, irrelevant ass
Top

Ugh, yeah I think I have a +1 of him, both copies pity breakers. I merged my old +1 Laegjarn into the +atk one that pity broke me on this banner finally since I had time today, and it made me realize that all 3 copies of her were pity breaks as well. First was nearly a year ago going for Christmas Tharja, second I don't remember, but I don't pull dupes on purpose, and the third was this one. Jeez.
Top

Wow, these voting gauntlet banners are terrible. Pretty much everyone but Dorcas/Helbindi is available at 3-4 stars anyway and there's green color sharing on both... yikes.

I did at least free-pull my first Valbar, but he's got terrible IVs so I'm not promoting this one.

E: Wow, the tap battle boss music. At least it gives us orbs this time and also Halloween accessories (a little late, but I'll take them).
Top

I played tap battle with the sound off lol, perhaps I'll listen next time.
Top

It's that metal song from the book III trailer. Just feels out of place.
Top

Haha yeah I heard it last night. I wonder if that song is in the aether resort/performance hall
Top
Post Reply
2320 posts