Okay, so I've been piddling around in MEA. Oh Yeshua Cristo. The character creator SUCKS. "Wanna be a super model pretty boy? No? Then pick from one of 10 faces, chosen from the ugliest, goofiest looking mother fuckers in the galaxy! Don't like those? Fine. Here's ONE face you can edit. Enjoy your five sliders. Wanna change the shape of your eyebrows or nose or eyes or anything? Fuck you, too bad. Now enjoy your literal pile of shit hairstyles and *snrk* 'beard options'." So, now I've got my goofy looking character who somehow manages to look even worse in game, how about those animations? FFXIII had better lip sync and facial animations, as well as animations in general. I mean, this Asari doctor is giving my character a check up after waking from cryo sleep, and she literally jerks around like a malfunctioning robot. I've been playing for five fucking minutes. I'm starting to think even five dollars was too much.
Top

Thor, it's like I'm in a world of malfunctioning robots pretending to be people, and doing a piss poor job of it.
Top

This Kotaku article about the culture at Bioware and how Inquisition, Andromeda, and Anthem were created really shines a light on some of these things, to the extent that it's kind of a miracle these games are in any kind of playable state.

There were a lot of things I liked in Andromeda, the face I chose didn't have as many weird rigging issues, and the combat feels really nice. Some of the characters are kind of rehashes of similar character ideas to ME1 (grumpy Krogan grandad, bookish Asari archaeologist) but I did still enjoy my time with them, especially getting their conversations as you drive around the planets.
Top

Yeah, EA screwed the pooch when it comes to Bioware. There's a raisin all their top guys left in the last few years.
Top

Bioware's gotta take their share of the heat as well, not just EA. The weird culture of infighting between the studios as covered by Schreier's piece is pretty awful. And, of course, Bioware's response to the piece has been one long eyeroll.

It's so wild to me that, at least for the moment, it kinda looks like Fallout 76 has a better chance at a healthy life than Anthem. They at least have a roadmap for the next year. I dunno what the hell Bioware is going to do.
Top

No, it's all EA. Bioware has been dead for years. The mouldering corpse EA keeps dragging out to puppet, Weekend at Bernie's style, is just finally falling apart.

As to the game, why do all the aliens have the exact same face? It's particularly creepy on the Asari, since they're so human looking. Still, the combat has been fun so far. The jump jet is great. Too bad the UI suuuuuuuuucks.
Top

They all have the same face because they had to throw the game together in less than a year with constantly changing requirements. Bioware may have gotten away with this when they were on their own and had strong vision at the top, but now they're rudderless and just trying to wing it. You can be an amazing coder or animator or both but if you don't know what exactly you're working on most days and/or whatever you do may just get thrown in the bin it's hard to have time to design different faces for alien races.

At this point EA has to give Bioware space, but the potential issue is that most of the top talent and vision from Bioware has moved on, so even with infinite time and budget (and direction which they lack) we're not likely to see an old-style Bioware game out of that company.

Sure some of that lands on EA's shoulders, they've done this to other assimilated developers - but Bioware was running unsustainable practices well before that and now it's all spun around and slapping them in the face... well those that are left anyway.
Top

Okay, whoever decided to resurrect ME2 planet scanning needs to be smacked.
Top

How? How did they make driving the Mako worse?
Top

Cora's whole "I'm a Biotic, woe is me!" bullshit is starting to piss me off. For starters, she's not stronger than Kaiden, the officially recognized "Strongest Human Biotic in the Alliance Military". She's definitely not stronger than Jack, yet the military were more than willing to work with both of them in the original trilogy. Hell, Kaiden was doing so well, he was actually higher ranked than Shepard in ME3. So this whole "I can't fit in cuz mah Biotics!" shit is getting really old. Plus the "I'm an Asari Huntress!" schtick is also wearing thin. Pretty sure Jack could tie her in a knot without even trying. Just because you trained with the Asari for a few years doesn't make you the galaxy's biggest biotic bad-ass. Jack, Samara, Liara, Kaiden, possibly even Miranda would massacre her, and don't get me started on the arbiter of annoying, Liam. "I shot him in the face, derp derp!" Good job, jack ass. So glad to finally get both characters out of my party.
Top

Yeah Cora's whole schtick didn't really vibe with me, she's like someone who went to study Karate in Japan for a few years and came back as if she's somehow gained Japanese blood or something.

Liam is... fine? okay? kinda cool? It sucks that he was the one they had immediately break first contact protocol, because the rest of his character is so much better than that. I certainly liked him more than Carth/Atton/ME1 Kaidan, for whatever that's worth.
Top

After having spent a significant time with MEA, it is officially "meh". The combat is a lot of fun, once you're high enough level to have a full suite of powers anyway. The main story missions are also a lot of fun. The planets, unfortunately, tend to be a bit bland, just big ol', mostly empty "open world" sections with a bunch of fetch quests. The story and characters are mainly where it fails. It's literally a retread of ME1, but shittier. Drack is Wrex, but blander. PeeBee is Liara, but "wacky", Cora is Kaiden, but a weeaboo, the Kett are the Geth/Husks, but smarter. The story/characters falls into the same trap as so many sequels, "Hey, we have the same stuff as the first, but better!" It's lame, and it's lazy. That, combined with the very rough start, really hurts the game. Is the game worth playing, now that it's "fixed"? I would say yes, provided you keep your expectations low and you can get it cheap.
Top

Plus you get the Mako 2.0, everyone's favourite vehicle.
Top

"Hey, we have The Mako, but it has no guns and you can't drive up mountains anymore!"
Top

Why are you still torturing yourself?
Top

Clearly I hate myself.

The game is worth playing, as long as you don't expect a good story and just enjoy shootin' stuff.
Top

Wow, so Cora really is one of "those" people. I'm doing her loyalty mission, and she keeps lecturing the actual Asari commando on how to be an Asari commando. I just wanna smack her.
Top

Oh, so that's the secret.

My favorite part of Andromeda was when, as femRyder, I introduced myself to Cora who promptly announced "I'M NOT GAY!!" BITCH WHY YOU CUTTING YOUR HAIR LIKE THIS THEN: 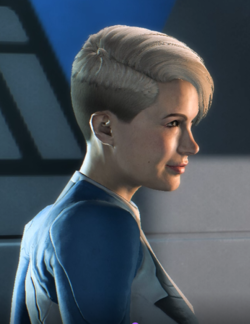 miss me with that hetero shit

I bought MEA at launch for a lot of bucks and I regret it.
Top

Do you think Cora was always supposed to be straight? Given what we know about how recent Bioware develops their games, a human biotic with that haircut going to study on a female-race world would make a lot more sense if she wasn't.

At this point it wouldn't make endear her character to me/us any more, but at least that part would make more sense.
Top
Post Reply
21 posts • Page 1 of 1