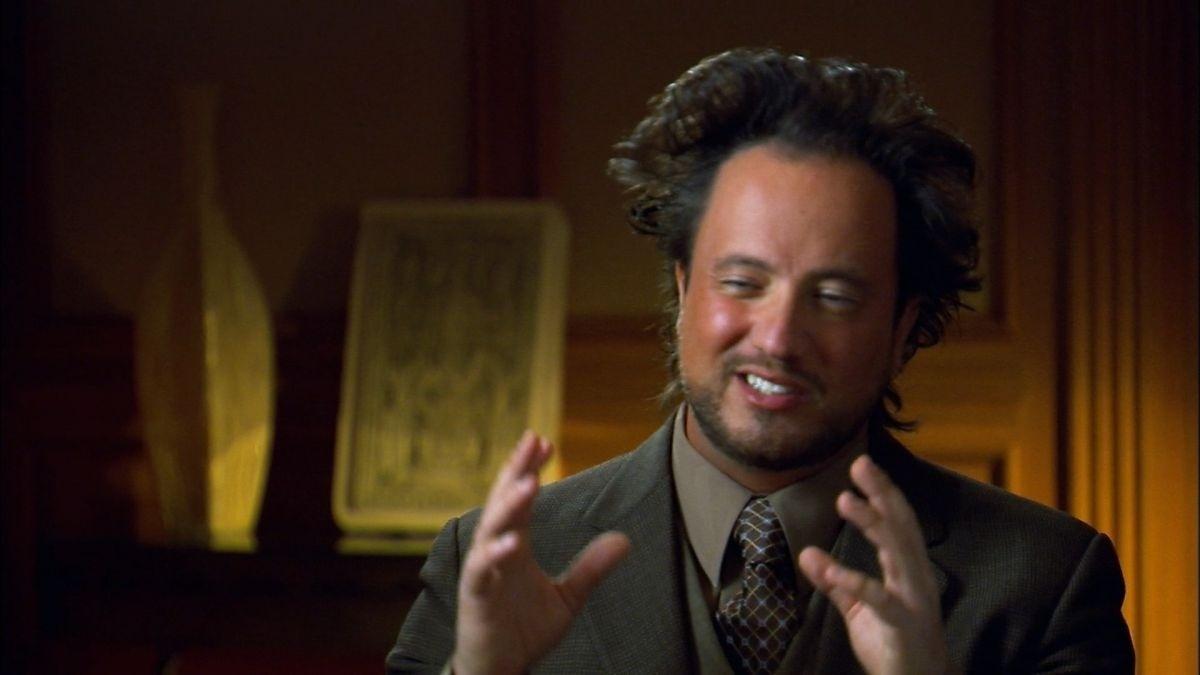 By now you’re likely aware of The History Channel’s Ancient Aliens, a dubious examination of suspected extraterrestrial activity throughout Earth’s past. Similar to the ongoing march of soulless reality programming on TLC (hey, remember when they were owned by NASA?) Ancient Aliens is an example of The History Channel’s questionable grasp of their own mission statement.

As fallacious as the science is, and as disreputable as host Giorgio A. “Crazy Hair” Tsoukalos appears to be, Ancient Aliens is unwittingly hilarious. Therefore, we feel that it’s the perfect target for our first Caffeine-Fueled Drinking Game!

Note: Team CF cannot condone attempting this ordeal with anything less than a 6-pack per person, given the content you’ll be dealing with. Additionally, under no circumstances should you spend actual money on this show in any form. You may regret that more than the hangover. Please drink responsibly, observe all local liquor laws, and practice good science.

With that in mind, it’s time for the game!

• Someone suggests that aliens existed in history because a painting, wall carving, jar, or other bit of art “suggests” alien activity, while completely ignoring the religious aspects of said art because obviously “gods don’t exist.”

• It is implied the aliens are gods. You will be destroyed no matter which episode you watch.

• Crazy Hair says something to the effect of “it was aliens because [insert blank here] doesn’t exist!” Complementary to the aformentioned god rules.

• George Noory of Coast To Coast AM makes an appearance. Take two drinks if you wish it was Art Bell instead.

• Someone gets history, mythology, or part of a culture so mind-numbingly, astoundingly wrong, that you wonder if the “expert” in question has even opened a book in his or her lifetime.

• The narrator says words like “clearly,” “perhaps,” or “it is likely” when suggesting that the answer to alien activity on Earth is right before our eyes.

• They slip in some actual experts who are actually talking about a subject they know about (such as that poor man from the Joseph Campbell Foundation) in order to make it look like they are talking about aliens. Look! A real expert talking about smart stuff! He has a degree and everything!

• Someone suggests a bird, carpet, chariot, flying elephant, ray of sun, or pretty much anything not on the ground in a piece of artwork could’ve been representing a spaceship.

• Anyone mentions the book Chariots of the Gods. You should be plastered in the first fifteen minutes of the show due to this rule alone.

• You shut off Ancient Aliens and start watching the South Park parody episode A History Channel Thanksgiving instead. Many of these rules should still apply.

Finish your drink if…

• Crazy Hair compares something in a piece of art to a modern invention and suggests aliens gave ancient cultures that piece of technology. For example, in one episode a bracelet on a carving was compared to a wrist watch, thus proving aliens not only need to tell time despite having hyperdrives or faster-than-light travel, but prefer Swatch to digital. Editor’s note: someday everyone will be running on Swatch Internet Time. Get hip to the .beats

• You spot producer Kevin Burns’ name in the credits and briefly mistake him for the far more successful documentarian Ken Burns of The War fame.

We hope you enjoyed the game! Join us again next time for more alcohol-fueled entertainment. Until then, we’ll be trying to catch Giorgio Tsoukalos before he starts a war with the Narn.